For those of you who follow me on Twitter you know often I’ll post some gripes about the sourcing of contract information, specifically as it pertains to the website Spotrac.  Spotrac began operating a few years before OTC trying their best to cover salary data for all major sports. It was an impressive attempt at finding ways to aggregate data in one place and build on various reports, but completely lacking when it came to football. Sure they had contracts online but the majority were wrong and grossly miscalculated.  That was understandable because the NFL was a bit trickier than the other sports.

For one thing no central entity existed to “borrow” contract numbers. Basketball, baseball, and hockey were all covered by either websites or USA Today. So they would jump in, “borrow” those numbers and present them on the website. The NFL required a lot more work and understanding. Their owner in fact contacted me about it and I even helped him out with some things and rules. Im sure you can go back and find old copies of their site where they referred to “dead money” as “buyouts” to see where things were.

When I launched OTC I saw a void in the world of football. While certain other websites existed tracking data for various teams (sorry if I forget anyone here but the good jobs were done for the Patriots, Jets, Steelers, Lions, Ravens, Bengals, and 49ers at that time)  there was nothing solid on a league-wide basis.  Coincidentally these were also the only teams accurate on Spotrac because it was an easy format to “borrow” numbers. So I thought I would give it a shot because I understood the rules of football very well, had made a number of connections through the years, and was able to make reasonable estimates when the time called for it. So I launched OTC, not just to collect contract numbers but to discuss contracts, analyze them and create a platform that helped people, specifically those looking to work in football, gain a better understanding of it. Within a few weeks the entire site was copied straight down to mathematical errors I had made.

I believe very strongly in sourcing where you get the material from. People work hard to obtain these numbers whether it is a big name guy like Adam Schefter or the youngest beat reporter that just got a job covering a team. I do my best to source my own information but certainly “borrow” at times as well. Whenever we do that it’s noted in the contract details we post with a link to the original report. In some cases the reports may just be parameters of a contract and we connect the dots to fill it all out but we almost always link back to the post, tweet, twitter account, article, etc…. When we don’t do that it means we sourced the data ourselves or made estimates based on knowledge and maybe some high level reporting like player X signed for 5 years or understanding team tendencies for contract lengths and mechanisms. Generally we have been able to hit far more often than not on such estimates. If for some reason we forget to put a link initially and catch that we will go back and add it in.

Back when Spotrac first swiped the site we came to an agreement that they would need to place a direct link on every one of their salary cap charts and player pages that linked back to the appropriate page as to where they were getting the data unless they had another source they were linking to.  That never really materialized other than a generic link back to the homepage (it did for other writers who got direct links), but whatever, it was what it was. Over time the links were made smaller, buried lower and lower, sometimes not used, and eventually just outright removed. Eventually I asked to be paid to provide him the numbers and I wouldn’t bother about it anymore but never got a reply.

Now if you go on their site they post some statement about contracts being collected from “verified reports”. Apparently “verified reports” is a code word for “OTC”.  So needless to say that is pretty frustrating and gets even more frustrating when you see contracts numbers in articles “sourced” from Spotrac and get emails asking why I have a number that doesn’t agree with their. 99% of the time the answer is simple- they haven’t copied that portion of the site. The other 1% of the time I probably made a math mistake.

So to bring more attention to this each week I’ll be posting a contract not sourced to OTC that was clearly taken from OTC. How do we know it’s taken and not sourced?  We intentionally move some numbers around to not have any material impact on the cap figures but are easy enough to spot when we check to see when and what they are “borrowing”.

This week I’ll use Reshad Jones of the Dolphins. We posted this about a week or so ago after tracking down the numbers on the contract. You can see in the attached photo the numbers now match on both sites. But what we did here was simple. We simply moved $100,000 in workout bonus money to roster bonus money. Needless to say they did the same. They assumed, which would be the proper assumption if estimating a deal on limited information, that these were per game bonuses and wrote it as such. We also did not bring any attention to the fact that Jones’ signing bonus is not $9.2 million. The prorated amount is correct but the reasons why that happened I did not put online, so they are “reporting” a $9.2 million signing bonus. Finally you can see in their notes that $2.1M guarantees “at a later date”. I didn’t post the date so they cant do anything more than that. 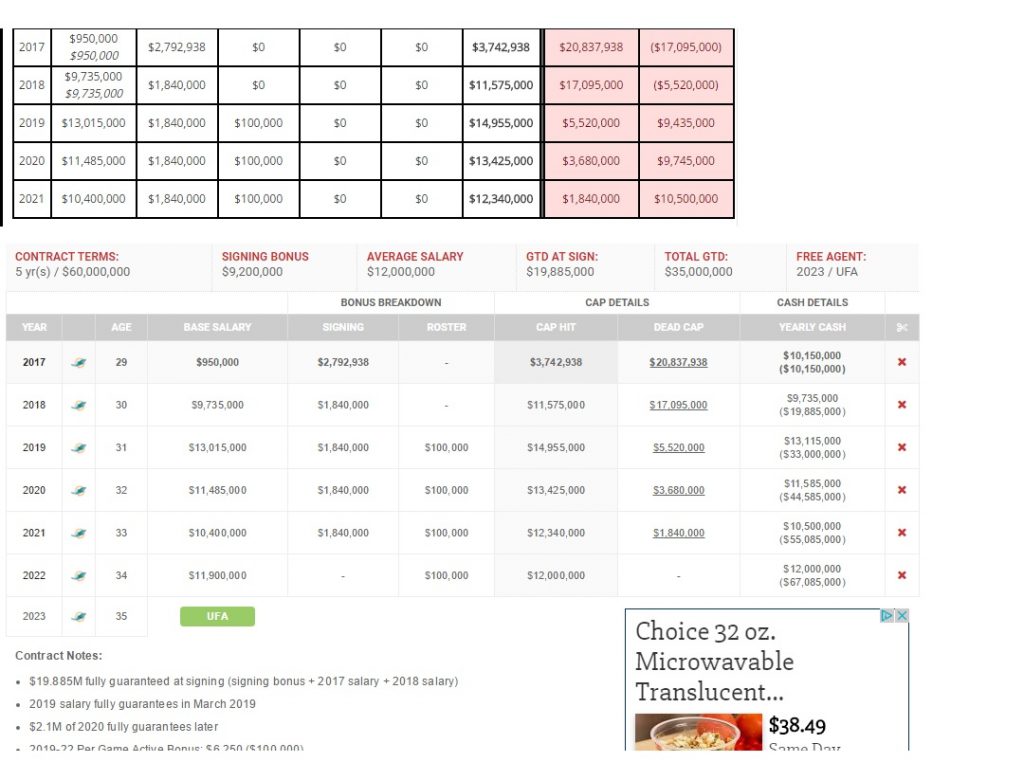 Now if I am wrong and they sourced the same errors and it’s a massive coincidence feel free to link to that material, which should have been done in the first place anyway. I have dozens of other contracts I can put up in this place that cover “borrowing” with absolutely zero attribution.

I enjoy doing OTC, writing about the cap, and interacting with people in and outside of the NFL about various issues but its not my job to provide an entire website for someone else. Its one thing if it builds on the data, offers opinions on a report, or does something different, but it doesnt. It just takes the same table, copies it, and put it on another site and doesnt even bother to remotely indicate where it came from.  They may as well just use the embed feature we have because that is all that is done. Im hoping that it stops. I can always significantly dumb down the content of OTC in the future to make it stop but that really benefits nobody.  So for the time being we’ll go draw attention to this “borrowed” information and hope it ends at some point down the line.