The eve of free agency carries with it the promise of new fortune. When the annual spending spree launches in earnest tomorrow, it will bring life-changing pay raises to dozens of younger players. A number of other fourth-year players, meanwhile, will enjoy more modest pay increases in the coming season due to an aspect of the collective bargaining agreement called the Proven Performance Escalator.

Introduced in 2011, the PPE codified and standardized a common practice that had developed in rookie contracts over the preceding decade. At the onset of the 2000’s, most NFL teams signed later-round draft picks to shorter contracts. A handful of players signed for as little as one or two years, compared to first- and second-round picks who at times signed for seven years or more. Most typically, players drafted after the second round signed three-year rookie contracts, upon expiration of which they would become restricted free agents.

Over time, a number of teams soured on restricted free agency. RFA tenders convey rights of first refusal—the right to match a signed external offer—and draft pick compensation in the event that a player does depart via such an offer. This offered strong protection against poaching by other teams; very few restricted free agents signed offer sheets during the decade, and fewer still ultimately changed teams. But the issuance of restricted tenders also offered players a window to exercise leverage for new long-term contracts, as they could decline to sign the tender until deep into the offseason without incurring the financial penalties associated with a contract holdout.

To circumvent restricted free agency for drafted players entirely, many teams moved toward signing all draft picks to four-year rookie contracts. This placed such players under contractual obligation for what would otherwise have been their restricted seasons. Since even the lowest restricted tenders offered considerably greater salary than the fourth-year minimum typical of rookie contracts, this represented a step backward for drafted player earnings. To help bridge this gap, agents were often able to negotiate performance-based escalators that could push fourth-year compensation to levels comparable to the restricted tender amounts.

By the 2010 draft, only Baltimore, Detroit, and Pittsburgh still signed draftees to three-year deals. The 2011 CBA brought with it significant changes to the rookie compensation system, starting with much firmer slotting of rookie contracts meant to reign in prices for the very highest of draft picks. It also mandated that all drafted players sign four-year deals, and for players drafted after the second round, it formalized the practice of fourth-year pay increases as the Proven Performance Escalator.

The PPE increases the fourth-year compensation of drafted rookies to the low RFA tender amount based playing time thresholds met during the player’s first three seasons. For players drafted in 2014, this means an increase from as little as $690,000 to this year’s low RFA tender amount of $1,797,000. This is a significant increase; for all players drafted after round four of that year, it represents more than their career earnings over their first three seasons combined.

Still, it strikes me as being inadequate compensation for the loss of restricted free agency, in several ways. First, it explicitly does not apply to second-round picks, an exclusion for which see no good reason. No second-round pick earns as much as the PPE amount in his fourth year under his rookie contract; the highest-paid second rounder from 2014, Xavier Su’a-Filo of the Texans, stands to make just $1,177,036 this year under his rookie deal, or less than two-thirds of the PPE amount. Draft picks at the bottom of the round stand to earn less than half of the PPE amount in year four. Clearly, all second-round picks would benefit from the availability of the PPE. 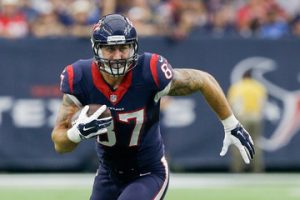 Texans TE C.J. Fiedorowicz is among forty players who have earned the PPE in 2017.

The unavailability of the PPE to second-rounders limits their earning potential under their rookie contracts to less than that of players drafted well after. If Davante Adams plays out his fourth year in Green Bay without an extension, he will have earned $3,933,402 in four years under his rookie contract. Meanwhile, because of the PPE, Gabe Jackson will earn $3,948,376 from Oakland over the same four years, despite having been drafted nearly a full round later than Adams. The last pick of the second round in 2014, Justin Britt of Seattle, will earn $3,456,930 over his four-year rookie deal, absent an extension this offseason. Houston drafted C.J. Fiedorowicz just one pick after Britt, at the top of the third round; having earned the PPE, he now stands to make $4,160,304 over the same four years of his rookie contract.

This seems to me to be fundamentally unfair to players selected in the second round, and it doesn’t stop there. The CBA mandates that undrafted players sign contracts for only three years, which leaves them still eligible for actual restricted free agency. (The great bulk of restricted free agents, now, entered the league as undrafted players.) For the best such undrafted players, they stand to earn far more than the low RFA tender amount. The middle RFA tender this year offers a salary of $2,746,000, and the high tender offers $3,910,000. This means that Isaiah Crowell, an undrafted running back who has been tendered at the middle level, stands to earn $4,286,000 over four years even without a long-term extension. That exceeds the earnings under the rookie contracts for all but the first 49 selections in the 2014 draft, even if they earned the PPE bump. These disparities will only increase over time, as the RFA tenders grow at a rate exceeding rookie salary.

Addressing the inequity for second-round picks would be easy; simply extend the PPE to apply to all picks after the first round. Bridging the gap between undrafted players’ eligibility for higher tender levels, as compared to what drafted players can earn under the PPE, presents more of a challenge. Conceivably, a hierarchy of performance thresholds could be used to escalate those fourth-year salaries to the higher RFA tender levels. At an increased playing time threshold, for instance, a player could earn escalation to the middle tender level. With increased playing time plus a Pro Bowl selection, he could earn escalation to the high tender.

I have, though, what I believe to be a more elegant solution: rather than escalate the base salaries of fourth-year players who meet the PPE playing time requirement, void the fourth year of their rookie contracts. This would subject these players to the same restricted free agency process as undrafted players. Clubs would be able to exercise the same discretion over tender levels, protecting and compensating players in line with their own determination of value.

The league would resist such a change, of course. Not only would it increase compensation for those players who now earn the PPE, but it would again extend the greater contract leverage of being unsigned that clubs originally sought to negate via four-year deals. Still, the number of players to whom such a change would apply would be relatively small. This year, barely 20% of eligible 2014 draftees earned the PPE. That’s a considerably lower number than the annual hordes of restricted free agents we saw fifteen years ago. More importantly, it would tweak the rookie compensation system that was altered in 2011 to shift dollars to those who have earned it at the professional level, to better do exactly that.