The current CBA ties player costs to three “buckets”- League Media, NFL Ventures, and Local Revenues- with varying percentages going to the players for each bucket. However, the bigger thing is that the NFL has capped off player costs at 48.5% while also adding in a floor (a percentage it can not go lower than) of 47%.

We are not smart enough to discuss the way that the breakdown of each item should go since we have no real financials to go off. As you may or may not know, NFL teams are privately held and the best we have to go on is that the Green Bay Packers generally show a 55/45 percentage split between the first two buckets and the third one, but likely are not representative as a whole of the “local” revenues”, but we can at least examine trends in salary cap growth to get an idea of where things have gone over the last few years. Below is a chart showing the growth each year in the salary cap as well as the four year moving average, during the cap era dating back to early 90s. 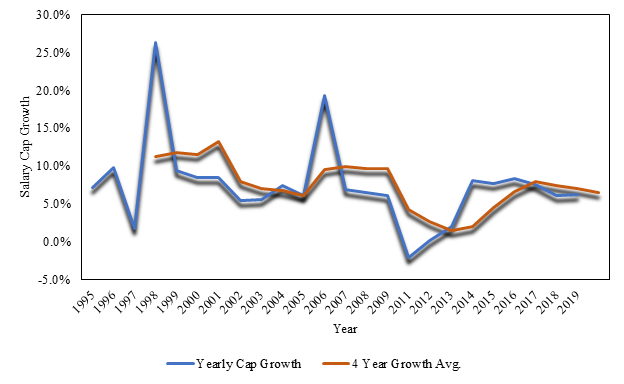 The big thing noticeable here is that when we had extensions in the CBA, for the most part, we saw pretty significant increases in the salary cap. We believe the CBA was extended in 1996 (9.8% growth), 1998 (26.4% growth), 2002 (5.5% growth), and 2006 (19.3% growth). Other than in 2002 those three years rank 1, 2, and 3 in cap growth over the entire length of the CBA. Those years were then followed by pretty sluggish growth rates before the next CBA caused a spike. By contrast in 2011 we saw a 2.1% decline, the only time in the history of the agreement that the cap has retreated. While there was a relatively large increase in 2014 you can see how the whole process has steadied with no “correction mechanism” that would cause a big spike in the cap going all the way back to 2006. Overall this is probably the worst run for players since the early 2000’s which was the only other period of very stable cap growth.

Stability is not a bad thing and there have been periods that are worse than the 2014 to 2018 timeframe but the spikes are very important too. When you have large spikes it forces teams to have to spend to keep up with the rising cap. Teams forced to spend are generally going to wind up doing larger and larger deals for the star players which in turn is going to increase the whole market. Those single year jumps have been very helpful in pushing player salaries. With such predictable cap growth the NFL has now been able to prevent most contracts from keeping up with salary cap inflation with many positions failing to break through to the next level.

It’s hard to imagine another agreement coming down where the players do not get some type of immediate spike in the revenues going their way. We would think a 50/50 split would be pretty equitable and would add millions of dollars into the pockets of the players even if no other changes occurred in the CBA.