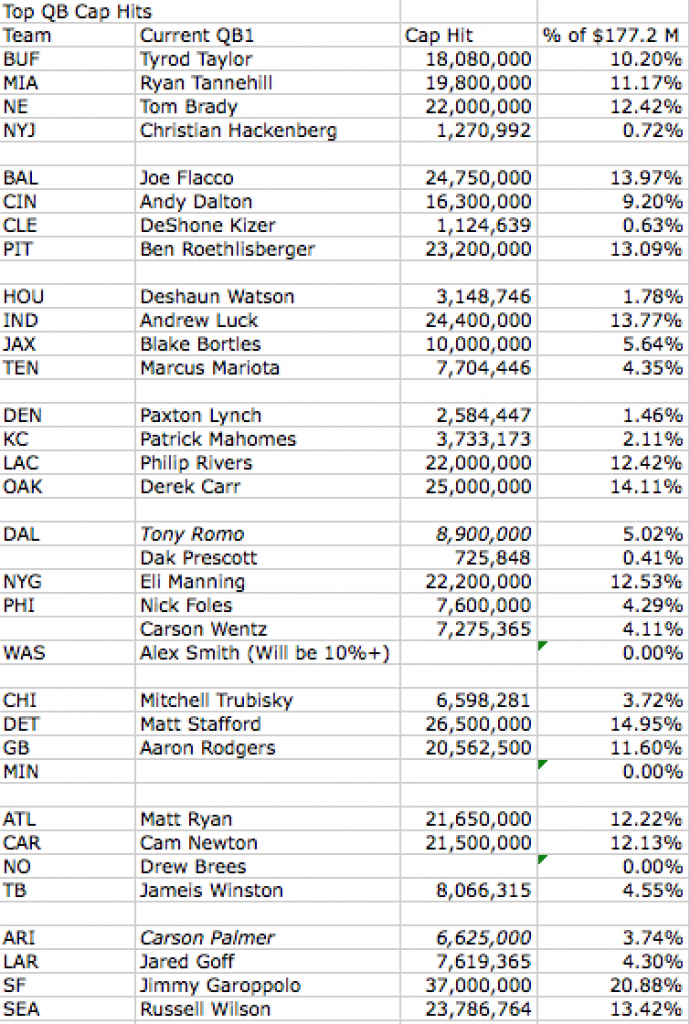 Taking into account the recent announcement of the $177.2 million salary cap for 2018, I wanted to give a picture of what each team’s QB situation currently looks like. I’m in the midst of writing an article that breaks down the two strategies for building a roster that most teams are using today.

The first is spending 10%+ of the cap on a quarterback, which is something that 16 teams are currently doing. These are the Bills, Dolphins, Patriots, Ravens, Steelers, Colts, Chargers, Raiders, Giants, Redskins, Lions, Packers, Falcons, Panthers, 49ers, and Seahawks. Some of these teams, like the 49ers have cap carryover, so the cap hits may be slightly less against their projected salary caps. For example, Jimmy Garoppolo will be closer to 16% of the cap because of a cap carryover that has their cap near $220 million. When a team uses this strategy, they’re hoping for the kind of production level than an elite quarterback can provide. As a baseline idea for what this kind of player is, this is the kind of player who completes 65% of his passes, throws for over 7.5 yards per attempt, had 260+ passing yards a game with the ability to go for 350 or 400 in a shootout or if the rushing attack is slowed down, and has a touchdown-to-interception ratio of around 28-to-12 or better.

The second main strategy is the low-cost rookie contract strategy. For some, this a replication of what the Seahawks did in 2013 with Russell Wilson, which is using the rookie contract of the quarterback to build out the rest of the roster, especially the defense. The Eagles had some dead money charges with Sam Bradford and Chase Daniel in 2017, but every team has some dead money, theirs was just invested in quarterbacks with one of those, Bradford, being a key trade asset they used to secure Derek Barnett and Jay Ajayi as a result of the original trade. They had Carson Wentz at a reasonable number spent around 27% of the cap on their defensive line, while the Seahawks had about 28% of the cap invested in theirs. I like this spending strategy with a rookie contract quarterback because it’s a sort of strategy that allows the defensive pressure on the opponent’s quarterback to decrease his efficiency, while your rookie contract quarterback then doesn’t have the pressure of having to have the big game every week. If the main strategy in football is to win with the quarterback and if the quarterback is the most important position, then finding ways to decrease the production and efficiency of the opponent’s quarterback is a great strategy.

As an overview for this offseason, as of today, this is what the cap structure of each team looks like:

Zack Moore is a writer for OverTheCap.com and author of the recently released book titled, “Caponomics: Building Super Bowl Champions,” which is now available on Amazon. You can follow him on Twitter @ZackMooreNFL.