So every year around draft time I usually like to try to take some different looks at draft values. The best received one was using the PFR AV scores for rookies as a baseline to compare against veterans and then translating that to a salary expectation. This would be a rolling scale since each year the draft changes its salary. Rather than rehashing the same stuff this time around I wanted to go with a “wisdom of the crowds” system by letting the actual NFL contract negotiators past decisions set our new values for the draft.

Normally I would do all the picks in the draft, but because of time constraints I’m just looking at the first round draft picks.  I can always expand this in later years as we build up some more of our historical contracts if there is any interest. So with that out of the way what exactly are we looking at here?

In general when a team negotiates a contract they are basing a decision on past performances right?  That basically means that the NFL is putting a price on what they saw during the rookie seasons when they sign a player to a new contract.  If Eli Manning signed a $16.25M contract in 2009 then that should tell me that his value as a rookie should have been $16.25 million. This way I don’t need to look at any stats, compare stats across positions, etc…I just need to accept that the contract guys did their homework and built all of that into their offers that they made.

So for each player drafted from 2004-2013 what I did was determine the annual value of the players contract of the first non-rookie contract that they signed. This included extensions, franchise tags, UFA contracts, and SFA contracts. The only exception I made to came for players who should have been eligible for free agency in 2010. 2010 was an oddball season with different rules regarding free agency because it was the final year of the CBA and a number of free agents were classified as restricted free agents after their contracts expired. In the case of these players I selected the higher of the RFA tag signed in 2010 or new contract signed in 2011.

After running through the numbers I realized pretty quickly that contracts signed in 2007 were not going to correlate at all with a contract signed in 2017 and that it would devalue too many players. So the next step was to adjust every player’s contract into 2018 dollars by using the growth of the salary cap as a way to calculate the inflation adjusted APY of the contract. Doing it this way allowed Calvin Johnson’s $16.2 million deal from 2012 to be worth around $23.8 million today.

So I ran the numbers again and thought it was pretty good but just looking at the APY for each pick I realized yet another big flaw- positional variation. This was easy to pick up when Jay Cutler and Ben Roethlisberger were both the 11th pick (as was JJ Watt) and caused the APY to spike wildly due to playing premier positions. So rather than just using APY I wanted to use percentile ranks for each position, which would allow us to kind of put a running back, edge rusher, and QB all on equal footing of sorts.

To determine the percentile for a draft pick their inflation adjusted APY was ranked against the current inflation adjusted APY for every veteran in the NFL. We could then average those numbers out for each draft slot to get an idea of the worth for each slot. When finalizing the charts I then used a 4 pick range as an average (1 pick before and two after) to help smooth out the numbers and give a better idea of the general quality of players available for a slot.

Before getting into the results I think it is worth pointing out some of the downsides of this method, two of which really stood out to me. One is that there is no control over a bad contract. For instance the Rams and Seahawks did downright hideous contracts with Tavon Austin and Percy Harvin respectively and everyone knew that the minute they were signed. I have no control over teams that do that. While those are somewhat balanced out by “good” contracts, when we are looking exclusively at first rounder’s I think the good contracts are less and less since teams don’t have incredible leverage to sneak into a good deal. The second issue is positional fluctuation. QB has grown in importance over time which leads to Ryan Tannehill having a higher percentile rank than the class of 04. While you can make some arguments against Manning and Rivers for a number of reasons there is no argument as to who had a more successful run. Other minor issues are things like using APY, as contracts have changed over the years but to me that still a reasonable (and easy) metric to use.

So what did we find out looking at picks this way?

The first thing that stood out to me is that there is a clear slide from 1 to 9 before the draft makes a recovery from 10 to 15.  What would be the logic in this?  My first thought was that teams are kind of picking up table scraps at the premier positions outside of the top 5 and then make the turn to best at less valuable positions but that really wasn’t it. Of positions with a larger run it seemed as if the edge defenders, running backs, and interior linemen simply were better players selected 10 to 15. These are all small samples but maybe it says something about the over-reliance on certain combine kind of things or programs that a player comes from.

I think it’s also pretty evident that unless you have one of the top 2 picks in the draft it is probably more beneficial to stand pat or move down and focus more on your scouting and what flaws exist in your scouting. There is a drop once you hit 30 so staying above that number is probably a good idea. Here is how we would plot the average potential results for the percentile ranks and the APY ranks for each pick. 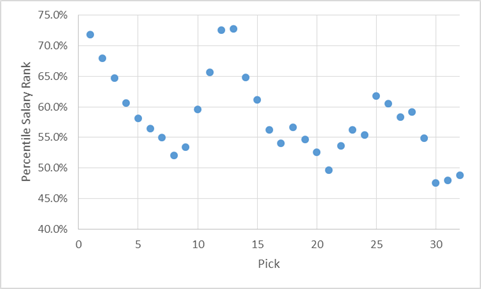 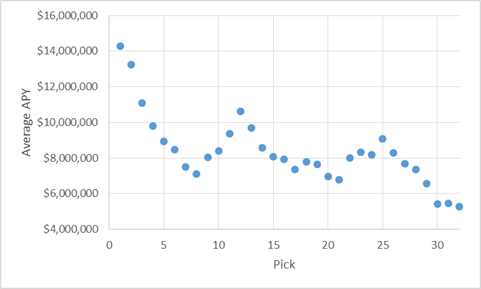 The data also indicates that on average under the current CBA that it is far less likely to have a complete bust in the draft. While expectations of a top pick are massive the salary is cheap and to justify the investment all the player needs to do is be worth more than his rookie salary.  From 2003 to 2013 nearly 70% of players drafted were worth more than what their rookie contract will be in 2018. This is why it is a very old school fallacy to claim that missing in the draft will set you back.  It simply doesn’t have that impact anymore. If I had to guess under the old CBA the first pick in the draft would cost upwards of $20M a year, which would likely make it a money loser for a team now that same player only has to prove about $8 million of value.

Looking at the hit rates for each position you really want to be in that 11-13 kind of pick range. The first pick and to a lesser extent the 2nd pick are really the only ones you want to consider for the top. The hit rates decline from there.  In terms of risk vs reward those top 10 picks, most specifically 4 through 10, are not great and while still undervalued they are close to being priced correctly.

The following table break down the projected APY for each draft pick this year and the average benefit per slot, the median benefit for each slot and the number of players who would have justified the rookie contract from 03-13.

In breaking down the data we can also start to see if the rookie wage scale is providing any benefits. While it is a small sample the early salaries have gone slight up when adjusted for inflation from about $10.2 to $10.9M per player for those who earned a contract of at least $1 million.  That doesn’t mean that for the players who hit like Cam Newton that they make up what they lost as a rookie (they will never have that chance) but many are making out better overall.

The big negative is that the new CBA has more or less eliminated the “position buster” contract. A “position buster” occurs when one player signs a contract for an astronomical number far above the market for that position. That in part can be fueled by draft status. Players like Johnson, Ndamukong Suh, Adrian Peterson, and Mario Williams all benefitted from the old system to kind of turn a position upside down. We really aren’t seeing that occur anymore and I think part of this is because of the draft slotting at the top being so cheap.

At least through 2013 new contracts are happening sooner as was promised when the CBA was signed. The average wait time for a new contract is 4.1 years in the new CBA versus 4.7 in the old CBA for players whose second contract is worth at least $1 million.

As expected this was most apparent at the top of the draft where wait times for an extension have been cut by about a year. That gap shortens considerably as the draft gets later and that should have been expected- despite all the claims of the new CBA killing all rookies it actually made salaries higher for many of those later in the first round provided they were good enough to see an option year. At the top of the draft teams hold more leverage due to the lower cost option years versus franchise tag type escalators and having more cap flexibility while players (and agents) are anxious to finally hit the massive payday so players and teams are coming to agreements much sooner. This seems pretty consistent across the board.

Finally here is the pick by pick performance. The Avg. APY is the average inflation adjusted, 2nd contract APY for each player drafted in that slot from 2004-2013. The moving average APY is  better indication of the quality of player available at the slot. It is the average of the pick before, the current pick, and two picks after (with the exception of the first pick where I just used the first three draft picks).  The average percentile is to indicate where the inflation adjusted APY would land for the specific position of the player while the moving average in that category is calculated the same way as the moving APY. This should be a different way to look at how much you are really gaining or losing by moving up and down in the draft.