With the NFL regular season just around the corner, I wanted to look at the teams that really have the most riding on this season. In general teams expect a lot from their most expensive players on the team, but expensive players often have a very short shelf life due to the nature of the NFL being a very young man’s game. That often means that the window for some of these teams is very small and a step in the wrong direction can quickly turn a team into the 2017 Jets. So for this post I wanted to focus on the top 10 valued players on a team and see at what stage we should view the teams this year.

To identify where each team sits I wanted to go a step further than just the traditional age and APY metrics. While those tools are valuable they don’t take into account positional trends. For example an older QB is not as negative towards a roster as a running back. The 30 year old QB is essentially in his prime while the 30 year old running back is likely just hanging on in the NFL. Likewise a QB making $20 million a year is far less of a real investment than a defensive tackle making the same. This allows for a better indication of team spending above average and prevents a player like Andrew Luck from grossly inflating a team’s commitment to their top players.

So what I used here were positional adjusted ages and salaries as metrics to determine a team’s lifecycle. To do this I first broke the league into positional groupings (QB, RB, WR, TE, OL, Edge, DL, LB, S, CB, P, K, and LS) and then calculated the average age and annual salary for each position. Each player was then given a position adjusted salary and age which is simply the difference between the players age/salary and the average at the position. I then grouped each team into one of four quadrants which I’ll discuss below. 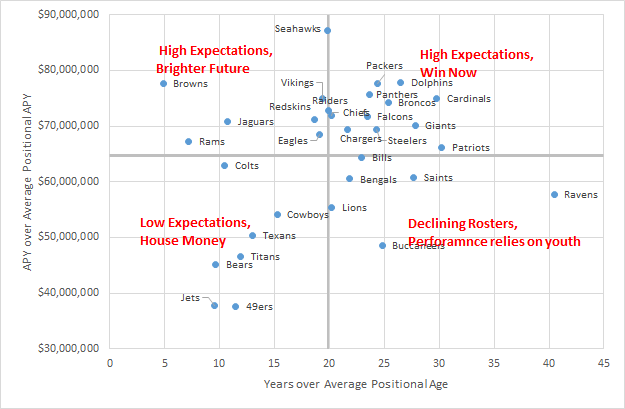 The low expectations quadrant is for teams that have young rosters and are spending very little on their top 10 players. These are teams that should be looked at as playing with house money since the experience level is low and the team is not investing money at the top anymore.

The bottom three in this region are the Jets, Bears, and 49ers. The Jets have the 3rd youngest group in the NFL and the 2nd lowest investment. The Bears rank 4th and 3rd while the 49ers rank 7th and 1st. The Jets and 49ers are the only two teams with less than $45 million in total salary over average and not surprisingly the two are considered the worst two teams in the NFL. If either does well it will mean that many young players did well while veterans outperformed their contracts.

When you look objectively at that Bears roster it makes no sense why they are not starting the rookie QB. They have attempted to make some type of unjust expectations by hanging onto some veterans and going with Mike Glennon as the starter. I would not like to be in John Fox’s shoes as he is likely to be a fall guy for a team that really would need to get some unexpected performances to compete.

The team that surprised me the most about being in here were the Cowboys. I always think of the Cowboys as a very high priced roster of veterans, but in recent years Dallas has sunk that money into younger talent and they have been much more efficient with the salary allocations. That said expectations in Dallas given their play last year are sky high but they really should be tempered as they will continue to need not only last year’s young players to do well but this year’s draftees to make an impact too.

The coaches that should be most worried for the year are Chuck Pagano and Bill O’Brien. The Texans are still a young, cheap team but has higher expectations than they should in part because of their defense and in part because of how bad their division is. Seeing the state they are in the Texans, had they found a QB, likely would have been set up to be a top tier team for a long time. I think Chuck Pagano is likely in the same category though that roster is not to the same extreme as the Texans.

Quadrant 2: Win Now and the Future

The teams in this quadrant, in theory, are those best positioned for the future. If the teams have priced their players properly then they have some pretty high level talent on top and these players are still young, which either means they were extended proactively by the team or recently signed as a free agent. These are the teams that should have high expectations in 2017, but the window should not be shut if the year doesn’t end in the playoffs.

The Browns are interesting as the youngest group in the NFL but with the 4th largest investment. Some of that is a bit misleading since it includes Brock Osweiler, which was simply a bad decision, but a number of free agent signings for offensive linemen, linebackers, etc… really pushed them.

The Rams and Jaguars both look to be in an interesting position moving forward, though both are generally considered year after year disappointments. The two should have a foundation to build on and if either finds a long term answer at QB (the Rams are the more likely of the two) they have potential to be in a great position for the next 2-3 years if they can keep their rosters intact.

The Vikings, Redskins, and Eagles are very close to the age line averages which makes this an important year for the three teams but wont put them into more of a must win territory until next season. Also moving there next year will be the Seahawks, but with the amount of money they spend (nearly $10 million more than the next closest team) the expectations have to be sky high.

The teams in this quadrant are the ones who really are at their roster peaks. They are above average spenders and their roster ages are also quite high. If things don’t break right for these teams there is a good chance that they will crash and burn in the near future. These are the teams that need good drafts to keep their window open.

The two teams with the most to lose this year are the Cardinals and the Dolphins. I’d argue that the Cardinals already saw their window close last year but decided to try it again rather than rebuilding this year. They have the 3rd oldest and 7th highest paid group in the NFL and that typically is not going to be a good combo. Miami has the 6th oldest and 2nd highest paid group. Those numbers tell you why they went out and signed Jay Cutler because they didn’t want to take the risk that Matt Moore could not handle the job.

The next few teams you could take in any order. I’d probably put the Giants, who have the 4th oldest group, next in terms of needing to win now. Like the Cardinals they have an older QB and receiver, and are also older at cornerback. This really is a team that should be considered all in on the year.

The Broncos, Panthers, and Packers you can probably all lump together. The Packers are the least worrisome only because of Aaron Rodgers, but all three are up there in age and salary commitments. In Denver the most interesting names are Demaryius Thomas, Emmanuel Sanders, and Aqib Talib. They extended Sanders already and Talib has played at a high level, but I would wonder if Thomas and Talib are in future plans if the team fails to advance further this year. Given how the Panthers finished the year this is not a good place for them. They are loaded with expensive players who are making the wrong turn on age.

Teams like the Chiefs and Raiders are right on the border and should get another year out of these teams without too much worry. LA, Atlanta, and Pittsburgh are the three teams where if things go right they probably can get two years out of their teams, though if things go wrong they could look to make changes. The Chargers, who have had no success of late, if they fail to win should indicate a really bad job by their GM in building the team.

The Patriots have the 2nd oldest roster in the NFL, though some of that is attributed to a 40 year old Tom Brady. Given their success it is near impossible to say that there is any window of opportunity especially since they are always willing to turn over the roster a year too early rather than too late.

These are the teams with lower relative cost players at the top of their roster that are older.   I generally look at teams like this as hanging on or chasing something long after a window of opportunity has closed. For these teams to be successful it is likely going to take draft picks to pick up the slack.

The lowest rated team in the NFL is the Ravens. Baltimore is the only team in the NFL with a legit top 10 group already above 30 years old. Their top 10 players are a combined 40.4 years older than the average players at that position. The next closest team is the Patriots at 30.3, so this roster by any metric is old. They have not made the playoffs in some time so its hard to understand what they are building here unless they are just hoping to get by as an 8 win type team until they hit in the draft.

Next in line is the Saints which should be no surprise to anyone. This is been a team trying to hang on for at least 3 years and thus far cant get over the 7 win hump. They have a a majr decision on their hands at years end when Drew Brees’ contract is up.

The Bills are still dealing with the mishaps of their last general manager and coaches decisions. I would expect them in the low expectations quadrant next year as they completely start over. The Bengals, who gave up some of their better players in free agency will likely drift closer to that lower quadrant though I don’t expect them to just jump into a rebuild as they will hang onto many players until the end. Their window of opportunity with this group pretty much closed in 2015.

The Lions are one of those teams in limbo. My guess is they will make a few tougher roster decisions once they re-sign Matt Stafford to drop into the lower quadrant. This is a roster that still needs a lot of work before they should over invest in too many older players.

Finally we have the Buccaneers who are among the lowest spenders, but they have spent on older guys. If the hope was to surround the younger guys with more veteran talent I think there were better ways to go, but the Bucs for years have not done well with any type of free agent acquisitions. In that case maybe cheaper works better. If they contend for the playoffs this year I would expect them to replace some of the older guys with more expensive players in their prime.

Here are the total numbers for each team’s top 10. Later this week I’ll do a similar look at the entire rosters.