With all the teams having now played at least four games I thought it was a good time to dust off the NFL Efficiency rankings and see who gets the most bang for the buck this year. The efficiency ratings are a simple metric that measure the percentage above or below the average a team is scoring and preventing from scoring against their specific schedule. So for example the Chiefs this year are scoring 51.6% more points than expected while holding teams to 17% below their expectations for a total efficiency of 68.6%.

Here is a plot of every teams current efficiency ranking plotted against their team’s annual contract value. The worst place to be is the upper left quadrant which means you are spending a lot and getting poor results. The best place is the lower right quadrant which means you are spending below the NFL average and still putting forth a good effort. The other two quadrants more or less mean teams are living somewhat up to their expectations. 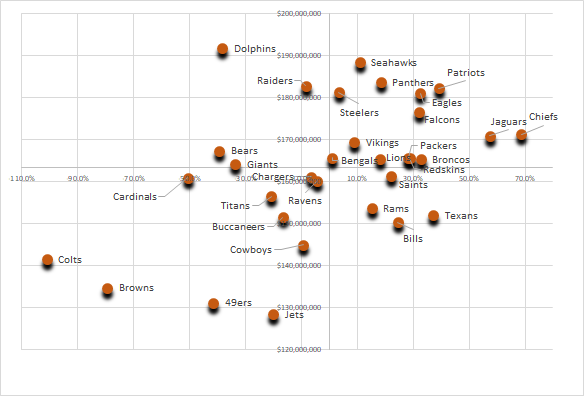 As things stand right now the biggest disappointments on the year are the Dolphins and Raiders. Both have very expensive rosters (the Dolphins have the highest priced roster in the NFL) and neither has looked good. Both have had QB injuries to deal with, but its been a poor team effort overall.

Trending towards the disappointing areas are the Steelers, Bengals, and Vikings. For whatever reason Pittsburgh just hasn’t fired this season. I think you always worry about players who hold out from camp and Le’Veon Bell looks like a shell of his former self. Perhaps they need to move away from him for a bit. The Vikings offense continues to struggle and the Bengals are an old team though they have played better of late. I think you could also throw Seattle into the mix of teams with a high payroll but less than expected results. Still for all those teams except the Vikings the divisions they play in are not strong so they all have good chances to make the playoffs.

The Rams, Bills, Texans and Saints are the four teams spending under the NFL average that are playing decently. The Texans have the big boost from the young QB who clearly sparked the offense. Buffalo is playing well on defense, tops in the NFL at preventing points, and I’d think experiencing the new coach boost we often see in the NFL. The Rams may be experiencing some of that as well, though part of their success is the fact that their young QB is playing like a pro this year. The Saints are only below average because they carry so much dead money that they cant spend more, but they did show some decent signs the last two games they played.

There are few surprises overall in the cheap categories. The only thing really worth pointing out again is that the Cowboys do have a cheap roster. That gets lost because they have so many stars and the reputation is massive contracts, but right now they are in a phase where many of their massive deals have been phased out and they are being replaced by lower cost options.

Here are the current ratings for each team plus what the predicted wins would be based on how the teams are currently playing.