While there is a focus on guaranteed contracts in the NFL the reality is that chasing guaranteed contracts is chasing fool’s gold. While it is nice in theory to say that teams should honor these long contracts the fact is deals we see and read about are often made to make agents happy and to potentially reap a reward down the line if the player happens to exceed the true expectation of the contract. The teams that reap the rewards are few and far between as most of the players are released after a two or three year period.

The following table shows the results of offseason multi-year contracts averaging at least $1 million a season, signed between 2015 and 2017 following the expiration/termination of a player’s contract.

The important numbers to look at here are the percentage of players who may be able to complete those contracts. Not one class of contract is above 50%. When you consider that the chart includes players from 2017 who are still in the early stages of their contracts expect the numbers to fall even further this year, probably knocking off another 5% in the five and four year category and 3% in the three year category.

We can all argue how guarantees would solve the problem but that argument misses the main reason that teams are moving on. The main problem is that players, as they age, are not as effective as when they were younger. It’s not, in most cases, due to lack of effort. It’s not, in most cases, because a player incurred a significant injury. The NFL game, a collision sport is simply physically taxing and when you combine that with the normal aging process teams identify that it is time to move on because there is more value in a younger player.

While we often argue it is because the younger player is cheaper that is more of an excuse than a valid argument. If it was the case you would not have linebacker Terrell Suggs and defensive end Cameron Wake signing relatively lucrative contracts, with the Cardinals and Titans, this offseason as they move closer to 40 than 30. Teams will pay for expected performance.  Since 2015, around 325 players have signed as “street free agents” (meaning their prior contract was terminated), for more than $1 million.  Only 100 players signed multi year contracts after being released (just 31 have signed for three or more seasons). What that should tell us is  that the NFL is going to simply change the way they work their contracts if deals become guaranteed. If they know that there is only a 40% chance of a player earning a five year contract, offers will be adjusted accordingly and for most, not all but most, they will see cash in the contracts drop as teams become more risk averse.

Unfortunately players have lost leverage in their negotiations with teams and that combined with the teams doing more and more studies on the effectiveness of older players has diminished the earning potential of the older player. Here is a look at the meaningful (meaningful meaning the player was active for 6 games or more) population of an NFL roster by age at various intervals since 1990 (data comes courtesy of Pro Football Reference). 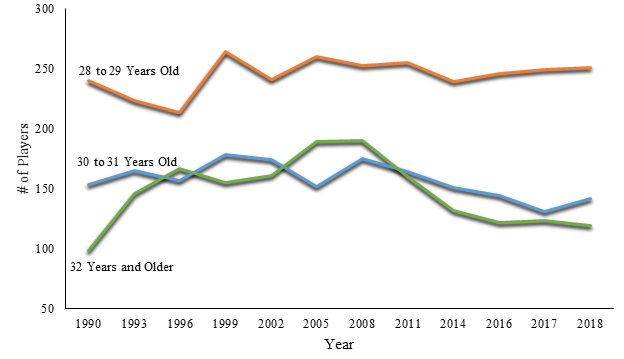 The original CBA more or less did what it was supposed to do for veterans from 1994 through 2010. You can see the rise in population of players 30 and older during that timeframe. Starting in 2011 we see the big decline in the 30+ age group. Notice that the sub 30 age group has remained relatively steady. We can argue all we want about the 2011 CBA but changes that occurred there regarding salary cap minimums, rookie wage scales, and unlimited salary cap carryovers at the very least allowed teams to experiment with rosters purged of older players. Based on the trends they have liked the results and no change is likely going to put the genie back in the bottle and see what happened between 1993 and 2010 where teams were more willing to have older players on the roster.

But even more so than that we were really only talking about a maximum of 30% of NFL rosters being older than 29. So while we can make a strong argument that a players earning potential ends at 29, for the majority of players it ends much earlier. Here is the breakdown of NFL rosters in 2018 for players appearing in 6 or more games. 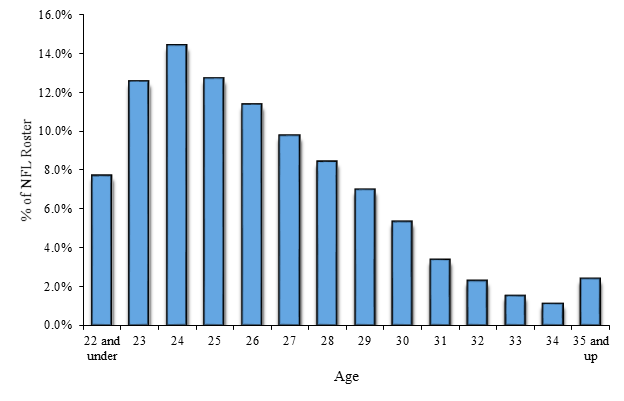 NFL rosters peak between the ages of 23 and 25 and slowly decline from there.  This age graph is the reality of today’s NFL and the players have to understand that the key is using this to their advantage. Why do teams fully guarantee rookie contracts for highly drafted picks?  Because they believe that they can give the team four to five years of value that outweighs the cost of the contract. 93% of draft picks are no older than 23 so when we see the big numbers at 24, 25, and 26 what should that mean?  It should mean that the NFL team sees value in the players at these ages.

Teams have argued for far too long that it takes years to evaluate rookies. It doesn’t. If it did the Patriots would never have extended tight end Rob Gronkowski after two years. The Steelers never would have with wide receiver Antonio Brown.  The Cowboys would not have extended offensive lineman La’el Collins nor would the Bengals have done the same for linebacker Vontaze Burfict and those two players are nowhere near the level of the other two players mentioned. Look at the stats of the players. Did the Falcons need four years to know that Julio Jones deserved a monster raise from his rookie deal? Of course not! Even in the current system teams can decide that an undrafted player is worth a tender worth more than $3 million for the season after three seasons in the NFL.

The players would solve so many problems if they can shorten rookie contracts. The franchise tag is a major problem because after two tags a player is likely going to be 28 or older. With shorter contracts we would likely cap off the first chance at free agency, even after two tags, at no older than 27. That’s doable for a top line player since they will still be considered in the prime of their career. Teams were already willing to guarantee huge numbers to rookies and we can guarantee you that the percentage of contract guarantees should go up much higher when signing deals at 24 or 25 in free agency than 27 and 28.

Getting to free agency at this age gets the player into free agency at the peak of his career. Players who may be good but not great are going to get raises and you will likely see the rise of the middle class due to that even if those players will likely be done by the time they are 27. At least in this case they get the raise they deserve off a rookie contract rather than having to play out the rookie deal and finding out there is little more than a minimum deal waiting for them by the time they hit free agency at 27.

For elite players this is going to not only give them one good chance at earning a contract but likely two major deals. Under this type of system you should get a chance to cash in at 25 and then again at 29 or 30 if you are still really effective. That first deal likely would carry a massive guarantee if extended or signed as a free agent.

Obviously this is a big step for NFL teams and one that won’t be easy to achieve. Four year contracts for non first round draft picks has been the standard for ages and even the five year length for first rounders has been a standard for some time. If we are stripping down deals to two years we are even asking teams to give up the restricted free agent (RFA) process. But the rules have changed for NFL teams regarding player age and the players have to adjust accordingly and demand things change with it.

What can players give up?  Obviously part of it is that rookie contracts will fall further if they are two years in length. Bonuses will be smaller and teams are getting further “bust protection.” You probably are going to have to offer more control mechanisms. Perhaps an offer is that teams have is the ability to have three tags they can use in a year- the franchise tag, the rookie tag, and the transition tag. In this case the franchise tag remains the same (average of the top 5 contracts and two first round picks as compensation) while the rookie tag becomes the average of the top 10 players and carries a 1st round pick as compensation and the transition tag is a match only contract that follows the rookie option calculation for all other picks (3 to 25). Each tag should carry the 144% increase if used three times.

Why give up more control?  Because right now the team already controls the player. You are simply making it more expensive to control the player if he plays well. If such a system was in place in 2015 and we assume a 20% raise off each tag in a second year here is how Buccaneers quarterback Jameis Winston’s contract would have fared:

Winston would be giving up money early on but at worst he more or less breaks even by year three and considering that he would carry no compensation if signed in free agency on a transition tag would likely blow past his current contract. In all circumstances having the third year tag be the 144% raise likely makes him a free agent in year five. Under his current deal he would likely be tagged in year six!

This is the right path to give teams protection against first round busts (if Winston was like ex-Raider quarterback JaMarcus Russell he would not have earned even $10 million as the number 1 overall pick and been gone) while giving players the real chance at upside. If teams think this is too expensive then it will simply begin to shift that 30+ age grouping to be more favorable for veterans. Nobody should be upset about that.

Might things have to go to three years before two?  Probably so, but this should be the ultimate objective for players to better secure the financial futures of the next generation of players. Moving the rookie deals significantly down puts the sides on equal footing with both sides knowing that they will be lucky to make it past 27 years old but at least now they will be fairly compensated for their time in the NFL rather than the team side gaining almost all the benefit in the rookie contract.