Panic has not yet set in for Bears fans over the team’s inability to wrap up contract negotiations with first-round pick Roquan Smith, but they are starting to lose their patience. With Chicago set to face off against the Ravens in this Thursday’s Hall of Fame game (August 2nd – 8pm ET), the Bears were one of the first teams to report to camp on July 19th. Almost immediately, a certain player’s absence became a bigger headline than the guys there.

Fast forward to July 31st, all 32 NFL teams have reported to camp, and Roquan Smith is now the only unsigned draft pick from the 2018 NFL Draft. Jets 3rd overall pick QB Sam Darnold inked his deal yesterday after holding out over similar concerns. Both Smith and Darnold are represented by mega-agency Creative Artists Agency; CAA also represented nine other first round draft picks (full agency breakdown here). Roquan Smith’s deal will be in the $18.5-$18.8 million range over four years, fully guaranteed, with a signing bonus around $11.5-$11.8 million.

Initial reports on the holdup with Darnold claimed that the issue was related to offset language. Newer reports indicated, much like the reports about Roquan Smith, that guaranteed money void/forfeiture language was causing the delay. With respect to an offset, if the Jets and Darnold part ways before this contract is up and Darnold signs with another team, the Jets would want his new contract to offset some of the money he is owed from them. Darnold and his agent, on the other hand, would like to be able to collect from the Jets in addition to this hypothetical new contract; this is often called “double dipping.” (More in-depth breakdown of offsets as well as Darnold and the Jets’ situation from Jason Fitzgerald here).

With Darnold officially signed, some details about the major contract sticking points were revealed by Pro Football Talk: 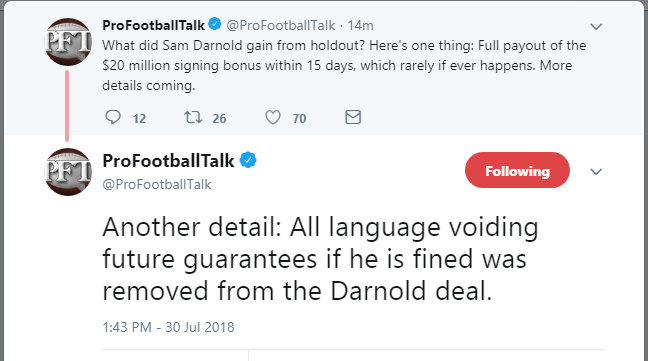 It appears Sam Darnold’s agent did a wonderful job securing guaranteed money ASAP, as well as eliminating void language. Darnold and his agent did however relent on the offset issue. Odds are that Baker Mayfield’s contract including offset language did not make for an easy negotiation there.

So… why is Roquan Smith, also represented by CAA, the last man standing? According to reports there are a few reasons, with one known factor being a disagreement over guaranteed money forfeiture following a potential fine or suspension under the NFL’s new helmet-to-helmet rule. In many NFL contracts there are clauses that allow the team to void part of the guaranteed money owed to the player if he were to be suspended or fined stemming from an incident either on or off the field. NFL players are paid on a bi-weekly basis like many standard salaried employees, with their base salary split into increments of 16 for each game in the regular season. Missing two games for a suspension could mean losing 1/8th of your yearly salary if there is forfeiture language to that effect in your contract. A common example would be if a player were to fail a drug test for PEDs. This helmet-to-helmet issue is unprecedented territory, however, as no one in the NFL truly knows what to expect from the rule.

The helmet-to-helmet rule is brand new for 2018 and it has already been very poorly received throughout the league. Members of the defending Super Bowl Champion Philadelphia Eagles were perplexed following a meeting with NFL referees. With the new rule already causing confusion, several players including Giants 2nd overall pick RB Saquon Barkley and recently extended Rams RB Todd Gurley made sure there were no clauses in their contracts allowing the team to void guaranteed money if they are fined/suspended for lowering their helmet under the new rule. On the other hand, Denver Broncos 5th overall pick DE Bradley Chubb and Indianapolis Colts 6th overall pick LG Quenton Nelson do not have the language excluded. NFL fans likely do not need reminding about the total mess that was the NFL’s “catch rule,” a very ambiguously worded and rarely consistent rule that thankfully was rewritten for 2018. Unfortunately, it appears the NFL may have replaced that mess with a new mess, the helmet-to-helmet rule. Only with this rule, the implications of a questionable call can go far beyond the playing field.

So, why aren’t there any other draft picks still fighting this fight? First and foremost, the issue affects certain positions more than others. Middle linebacker is arguably the position most affected by the new rule. However, the Bills #16 overall selection MLB Tremaine Edmunds, who has the same agent as Roquan Smith, signed on May 12th. The Bills reportedly had no issue excluding language that subjected their player to a loss of guaranteed money following punishment under the new rule. For the Bears to go to war over this issue with a physical middle linebacker like Roquan Smith, drafted to the self-proclaimed “Monsters of the Midway,” a franchise known for its ferocious defense delivering crushing blows to their opponents, seems like a crazy hill to die on. Chicago is essentially fighting to put Roquan in a situation that would lead to timid play and second-guessing himself as he also learns the nuances of the NFL game. Just last season, Bears MLB Danny Trevathan laid a big hit on Packers WR Davante Adams that was not deemed by the on-field referees to be deserving of an ejection. In fact, if you watch the video, the refs didn’t even think it was deserving of a flag until they saw the condition Davante Adams was in. Then, following review from the league office, Trevathan was given a two game suspension. Long story short, football produces some big hits. Aaron Rodgers spoke after the game about how he believed Trevathan had no intention of going for Davante’s head, it just happened to work out that way. So Roquan Smith and his camp cannot be blamed for wanting protection from a rule that no one has seen in action thus far.

Neither side appears eager to relent, and as a result Roquan Smith has missed almost two weeks of his first training camp. There is plenty of time before the season starts for Roquan to get fully immersed into the defense, but why start off the relationship with your alleged franchise cornerstone player on defense in this manner?

It appears the Bears just couldn’t have one off-season where positivity reigned supreme. After inking several high-priority free agents in Allen Robinson, Trey Burton and Taylor Gabriel; hiring an exciting new head coach in former Chiefs OC Matt Nagy; aggressively maneuvering in the draft to land their guys (like trading away next year’s second-round pick to move up for Memphis WR Anthony Miller); and bringing back important contributors from 2017 such as CBs Kyle Fuller and Prince Amukamara… they just had to get in a contract dispute with their first-round pick and have the last remaining unsigned draftee.

Today is the first Saturday of the 2017 college football season, and as a honor to this, I decided to put together a fairly simple page that breaks down cap spending by college. For those of you that have a rooting interest in a college team, you may find it interesting to see how well your school’s best football alumni are doing on NFL financial grounds.

The Cap Dollars By College page contains four views: by all colleges overall, breakdowns by team, and breakdowns by conference. Although there may be some further changes as final 53-player rosters are cut down today, I thought it’d be interesting to take a look at the current standings as the 2017 NFL regular season approaches.  If there are significant changes, I’ll update these results accordingly.

You might think that Matt Stafford’s recent extension pushed Georgia to the top, but remember that his 2017 cap number was unchanged, still at $16.5 million. Stafford, in fact, doesn’t have the highest cap number among Bulldogs–that goes to Justin Houston at $22.1 million. Cordy Glenn, AJ Green, Geno Atkins, and Thomas Davis are the other Bulldogs with eight figure cap numbers.

Miami is a bit of a surprise to see at #6, as all of the players from the glory days around the turn of the millennium are now out of the league with Vince Wilfork’s recent retirement. But Brandon Linder’s recent extension gives the Hurricanes five alumni with eight figure cap numbers. The other four are a pair of defensive linemen in Olivier Vernon and Calais Campbell, and a pair of tight ends in Greg Olsen and Jimmy Graham.

Some schools, like Ohio State and Florida State, have relatively even distribution among their highly-paid alumni. Other schools are top heavy with one or two alumni boosting them to the Top 25. Nebraska and Ole Miss are two excellent examples barely making the Top 25 due to the massive cap hits from Ndamukong Suh ($19.1 million) and Eli Manning ($19.7 million). Some of these schools may be on the verge of falling down the list quickly in the future. For example, Utah’s top two alumni are Alex Smith ($16.9 million) and Sean Smith ($9.5 million), but many feel that 2017 may be the last year both of them can get paid at that level. Losing $26.4 million in cap dollars would send the Utes tumbling down the charts if that does happen.

Each NFL Team’s College With The Highest Cap Spending

This list contains more variety than the Top 25 overall list does, and most of the variety comes from veteran quarterbacks dominating their team’s cap.  Teams where this sticks out like a sore thumb are the Ravens (Joe Flacco of Delaware), Redskins (Kirk Cousins of Michigan State on his second franchise tag), and Saints (Drew Brees of Purdue).

On the other end, a few teams without a highly paid quarterback also show some oddities. Kansas, a team that’s regularly a bottom feeder in the Big 12, gets the top billing for the Broncos due to the presence of Pro Bowl cornerbacks Aqib Talib and Chris Harris, Jr. Temple also shows up for the Jets thanks to Muhammad Wilkerson’s recent extension.

As for the overall top ranked Georgia, they make the list several times both with a high paid quarrterback (Stafford on the Lions), and multiple non-quarterbacks (Green and Atkins on the Bengals).

The SEC has long bragged about being the best conference in college football, and when it comes to cap spending on its alumni in the NFL, their bragging is justified. The SEC is the only conference in the NFL that breaks the $1 billion mark in cap spending.

The split between the Power 5 and Group of 5/independent schools also shows up. Boise State is the highest ranked Group of 5 school, but overall they only come in at #37. Within conferences, you can also see how blue bloods are regularly the top team in the conference, while service academies and regular bottom feeders show up on the bottom.

Finally, as of today every Division I-A school has at least one player on an NFL roster. We’ll have to see if that holds up by 4 PM Eastern time today.