Handy reference for the draft, free agency, the season, and Fantasy Football available on Amazon! 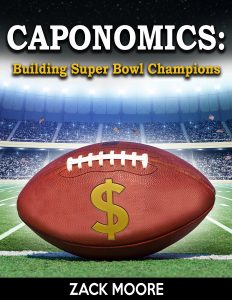 NOTE: Zack will be at attending the NFL Scouting Combine and is eager to discuss his book and research with NFL representatives, agents, and members of the media. Email caponomics@gmail.com to schedule.

By showing how Super Bowl winning teams construct their rosters, “CAPONOMICS: Building Super Bowl Champions” offers insight into how teams use data and analytics to create sustainable, competitive teams that compete for championships!

Zack Moore, a writer for OverTheCap.com, proposes theories and a blueprint for how teams might consider spending their cap dollars based on analysis of cap-era Super Bowl champion teams (1994-2016). A compendium of historical data illustrating the successful construction of those teams supports discussion.

Prior to becoming 2017 Super Bowl champions, the Philadelphia Eagles made smart decisions which allowed them to strengthen their complete roster within the confines of the cap. With an inexpensive rookie contract QB and a good low-cost back-up, they built the best defensive line in the NFL.

The rest is history as the Eagles went on to earn their first Super Bowl title.

“CAPONOMICS: Building Super Bowl Champions” offers in-depth discussion of Bill Belichick’s roster-building process that inspires the question: Was the Super Bowl match-up coincidence or a product of innovative player acquisitions made by the Patriots and Eagles within the structure of the cap?

‘MONEYBALL’ FOR THE NFL, “CAPONOMICS”:

“CAPONOMICS” offers football professionals and fans a guide to the salary cap:

From the front office and head coach to the draft and free agency, Moore suggests strategies for making roster and salary cap decisions…