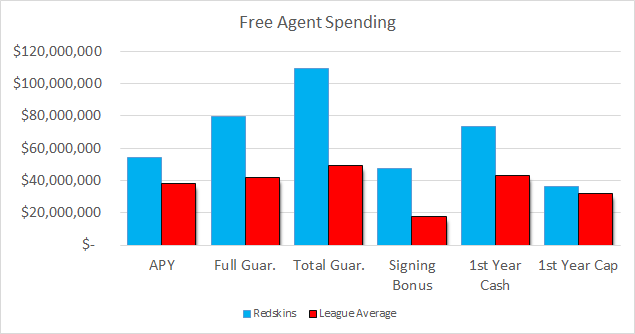 Technically this was a trade and an extension, but I wanted to count this in their offseason spending numbers since it’s a new player and new contract. Essentially what the Redskins did was give Smith the identical contract to what they offered Kirk Cousins last season. Smith is a somewhat lateral move but is 4 years older than Cousins and likely a bridge for the Redskins until they can find someone else. Picking 13th in the draft it was probably going to be difficult for Washington to draft a QB and Smith gives them a chance to be respectable. Washington more or less guaranteed him the full $71M at signing which I think is pretty high given his age, but as with QBs this is just how things go these days.  Grade: C

Based on the Sammy Watkins/Albert Wilson/Danny Amendola curve this is a perfectly fine signing. Based on any other scale they overpaid. This was a surprising signing all things considered. Last year when it made more sense to be active for the position they were more cautious doing the one year deal for Terrelle Pryor. This year they had a player with less of a track record and probably not a great fit for their QB and went all in for at least two years. They did get some nice size per game bonuses in the contract which helps out, but not enough.   Grade: C-

Washington did a good job in taking a bad situation and making it work with this contract. The early movers for free agent linebackers went crazy which hurt the other teams negotiating to keep their own players. Washington basically created a big sounding 3 year contract that in reality is a one year $5.75M contract. That’s a little high for Brown, but a smart way to bridge the divide and keep a player on their team this year. Washington can escape the contract after this season before future guarantees kick in. Grade: B

This is a nice little contract for the Redskins who can use a corner for the season. The Redskins only gave him a $1 million signing bonus so if things look bad in camp they can bail without too much of an investment. They have large $500,000 per game bonuses in each year of the deal which will likely save them a few dollars since he is never healthy for 16 games. Grade: B+

Dunbar was a RFA this year and the Redskins locked him up for an additional two years rather than going the RFA route. I think this was a smart decision by Washington as Dunbar is likely to see more playing time and with that increased playtime it is likely that his price could have hit the $5M range if he did well. I don’t think these is much downside to doing this deal. Grade: C-

This is pretty much close to as cheap as you can go for a veteran kicker on a long term deal. The guarantee is next to nothing for a 3 year contract so my guess is if they found someone better with a bigger leg in camp they might cut Hopkins. They are familiar enough with him to where I could understand doing this rather than going the minimum route for a player outside the organization. Grade: B

When healthy Foster is capable of playing and giving a decent effort. He should be a good reserve and is being paid as such. Over 30% of the contract is tied to being healthy so they are fine if he lands on IR again this season.  Grade: B

The Redskins are pretty much just treading water right now hoping that something works out for them. Most of their signings were older veterans who should at least prevent them from looking bad next season, which given their handling of the Cousins situations would be a PR disaster.

Washington is kind of in no mans land as a team. They don’t have a good roster but they have a few pieces that have kept them from looking bad and more or less put them in that perennial 7 to 9 win category.  It is near impossible to drop from that to a 4 win team without invoking the ire of the fanbase and likely seeing head roll while also impossible to really hit free agency and improve from that either.

Washington had a limited long term vision last year and settled on overpaying low cost players or taking some gambles on one year type contracts. They were better this year in that they really only overpaid Richardson while potentially locking up a few other guys to two and three year deals. They also walked away from any long term stuff with their own free agents. Id say it is clear that they are going to focus on the draft with these veterans providing the depth and experience needed to allow them to be respectable while the rookies learn how to play. That’s probably the right play for the Redskins even if trading away their second best corner to land Smith doesn’t really follow that plan.

This is a huge draft for Washington. If they don’t do well in the draft this roster is going to go into a tailspin starting in 2019 and eventually sink to that 4 win level where they can do everything over. For now it’s a rebuild on the fly.