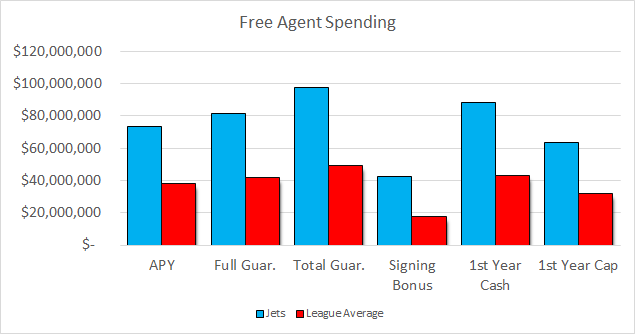 Johnson landed one of the biggest non-QB contracts in free agency, ranking 3rd in APY behind Sammy Watkins and Nate Solder and 1st in injury guarantees, 2nd in full guarantees, and 1st in first year cash.  The Jets clearly wanted to rebuild the secondary which led to an aggressive play here. Johnson played the last two years under the franchise tag and the payout for him, while not as big as Kirk Cousins, is pretty massive. All told he will be guaranteed to earn a whopping $56.7 million from 2016-2018, nearly $6 million than Josh Norman’s 3 year salary and about $10 million more than the next closest player. I was surprised at the Jets contract structure here given all their cap space using a massive $20 million signing bonus that is the largest signing bonus given to a cornerback currently under contract. That should provide exceptional protection on his $11 million 2020 salary. The team couldn’t sneak any per game bonuses into the contract which is a major miss for a player who has played 16 games once in the last 4 seasons. Three of the top five corners in the NFL have per game bonuses and last years two big signings (AJ Bouye and Stephon Gilmore) both agreed to them as free agents. So while this certainly fits a need I wouldn’t call this a good contract. Given the state of the Jets roster they probably were worried that waiting would cost them but this is a really player friendly deal. Grade: C

McCown was fine for the Jets last season and was popular with his teammates. There was a noticeable change in demeanor on the field for the Jets and a lot of that should be attributed to him. That said I’m not sure why the raise from last season. McCown last year signed a $6M contract with about $2 million in realistically attainable bonuses if he started. The Jets went 5-11 last year, gave him a $2 million raise and took out the need to start to earn that extra money.  On the Ryan Fitzpatrick scale the deal is fine but as part of a big picture focus and what they did with the quarterback position this seems like too much of an investment. Still in a QB starved league teams will always overpay. Grade: C

The good news is that the Jets didn’t spend $8 million a year on Demario Davis. The bad news is that they guaranteed Williamson the same $16 million Davis got with the Saints. Williamson is younger and a better player than Davis so in that sense the Jets certainly upgraded. Though they will likely be faced with the same coverage issues that have plagued them for a few years.  Like the old David Harris contracts if you are going to go with this kind of guarantee you really need to get a 4th contract year as the per year guarantee is really high all things considered. The Jets fell victim here to having a need for a position and then watching the Chiefs turn it upside down with a $9 million offer to Anthony Hitchens and then the Davis deal with New Orleans. Had they waited they would have gotten a better contract in my opinion, but they also run the risk of not getting their guy.  Based on where the market went early on they got the best deal of the big money linebacker contracts, but that’s not really a reason for a ticker tape parade either. Grade: C+

Claiborne may be locked into the one year contract deal for some time similar to the Prince Amukamara contract history until this past season. Claiborne had a decent year with the Jets and should be more successful with Trumaine Johnson playing alongside him rather than Buster Skrine as his main partner in the secondary. Hopefully that will cut down on the penalties. Like with McCown the Jets went with a pretty hefty raise as his salary will jump from $5 to $7 million which I think is kind of high but considering the Jets kept Skrine I don’t think they could have gone any lower and had him stay.  There were more economic options in free agency but he has one year in the system and if the team likes him it makes more sense to keep that look elsewhere. The guarantee here makes no difference as it’s a one year deal and he is a lock to make the team.  Grade: B

Forget the overall size of the contract as this is essentially a one year $7 million contract with three years tacked on as an option for the Jets. Signing Long just seems like change for the sake of change. Long hasn’t been very good and costs $6 million more than incumbent Wesley Johnson. He is better than Johnson but value wise this is a reach for this number. This may be another case where the numbers being discussed for other players (in this case Weston Richburg and Ryan Jensen) showed a big increase so they just felt a small increase over JC Tretter, last year’s top free agent, was good value. That said I like the structure here. Unlike the other deals there is no signing bonus and they did get a large per game bonus this year and $500,000 per year in each of the next three years. Considering where he is coming from with injury that’s a good move.  Don’t be surprised if the Jets draft a center even after signing this one. Grade: C

I love this signing. There is no risk if Bridgewater really isn’t healthy as the team will just be out $1 million which in QB gambles is peanuts. While the contract does have millions in potential upside if he starts I don’t think anyone will complain about that since him playing well opens up a world of possibilities for next season. Grade: A

While some of those earlier signings showed how acting fast can sometimes lead to pretty big overpayments, this one shows the impact of waiting. Pryor has terrific size and good upside. Though his run in Washington did not pan out he compares favorably to players like Donte Moncrief, Albert Wilson, and Danny Amendola, all of whom scored big bucks. He has a chance to be the Jets top receiver and certainly provides insurance if Robby Anderson has another run in with the law. Sneaking out a two year deal would have been nice but this is a solid, limited risk move.   Grade: A

Crowell is just 25 years old and I think was the best available running back this year.  People expected his 2017 year to be big and because it wasn’t he was dinged far more than he should have been. He has a nose for the end zone and should give the Jets a more steady option than Matt Forte the last few years and should mesh well with Bilal Powell. Given what the Jets gave Forte two years ago to get Crowell at essentially the same price I think is a big win.  I’m probably higher on this than most others. Grade: A

This is a bit high for Pennel but its right in the range that teams pay for the position if he projects as a 35% or more snap player, so the Jets must anticipate a bigger contribution now that Wilkerson is gone. If he does play well and develops into a solid contributor this should be a solid contract for the next two years. If he doesn’t they probably wasted about $2M on the season.  Grade: C

Pierre-Louis had a decent year with the Chiefs and he will give them an option to plug in at inside linebacker and will play special teams. He is a good athlete with more upside than Julian Stanford, but I’m not sure he is worth a million more a year if he slots into the same role. He is likely facing suspension this year for a few weeks and that likely lessened his market so Im not sure who they were necessarily bidding against. That said with so much cap room to blow there are worse things they could have done. Grade: C

Brooks is more of a special teams contributor than anything else but played last year in the system and should be familiar enough to step in on defense if injury allows. He probably would have had a minor market outside of NY. Grade: C+

Given how last year went for Santos I figured he would have been a minimum salaries player.  I mean this is as low as a non-minimum kicker gets in the NFL, but I have a hard time thinking the Jets needed to go there. The guarantee is plenty low so there is no guarantee he makes the team and my guess is he has to have a really good preseason to make it, but there is a worry he could get re-injured or nobody else in camp stands out. Grade: C-

If you take each individual move as an individual action the Jets had a decent offseason. I don’t think there is any notable contract that is downright bad and a few that are pretty good. The Jets overpaid in more than a few spots but with all the cap space they have for this season and next that really doesn’t make much of a difference.

Still though it’s hard to see any direction with the team. Almost every signing other than Johnson feels like a throw it against the wall and see what sticks kind of move. I really disliked the handling of the QB contracts as a whole even if individually they aren’t bad. There is zero upside to playing McCown in 2018 and he should only be the Jets QB if Bridgewater simply can’t play and the player who they draft they want to redshirt no matter what. If they go with Bridgewater from day 1 and don’t cut McCown they are likely staring at $25M in money spent on two QBs with millions more for a QB that was drafted. Maybe they cut McCown but Im not sure how well that would go over. Really both he and Bridgewater should have simply been incentivized such that the one who starts gets over $10M not both having that potential.

The Jets also had to know that they were in the process of trading away three second round picks to draft a QB during the earliest stages of free agency. While the Jets track record is awful in that round the expectation should be a good player at each spot. When you give that away you have to replace that potential with a quality free agent. The Jets had more than enough cap room to move into the upper echelon to fill some voids. Signing Andrew Norwell and keeping Wesley Johnson (or just going with Travis Swanson) rather than signing Spencer Long and keeping James Carpenter is a better use of money. They could have spent more to upgrade on the line, but they just did a bunch of short term deals for lower tier players.

While free agency isn’t the answer it does take time for a group of mercenaries to gel which would have put the Jets in a good position in 2019 if they got the right guys. Even if they didn’t they still would have had a ton of cap room to try again. The bottom line is that they are going to evaluate a ton of guys in 2018 and then do this dance again in 2019 with a roster full of free agents. I’m sure the Jets will be better this season but I still don’t the feeling that they know what they are or what they want to be.