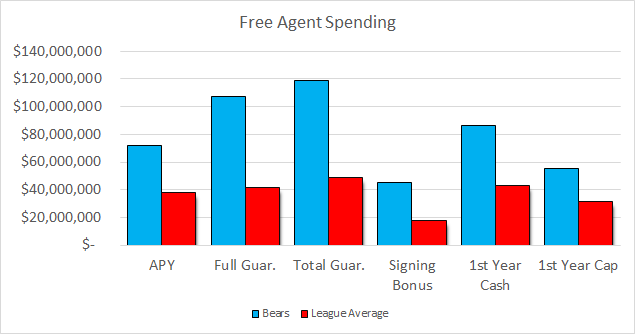 A risky signing given that Robinson has had one really good top line season in his four year career and is coming off an ACL injury. The contract is essentially a one year franchise tag contract with two additional years at $13 million apiece. If he plays well the Bears have themselves a good value as the yearly cash flows on this deal are very low compared to other contracts for top priced receivers. However they don’t get additional years if he does play well and he’s overpriced if he puts up numbers like he did in 2016. My assumption is Chicago looked at this as a risk worth taking because they had such a great deal of cap space this year, have a young QB, and its cheaper in the long run than doing a 1 year, $9M contract and then having to negotiate a 5 year, $16M a year contract in 2019. Still I would be very worried if a team willing to pay nearly $10 million for Donte Moncrief didn’t see fit to do the franchise tag on the player. Grade: B

The Bears are getting far too much grief over not using the franchise tag on Fuller to make him “prove” he deserves a longer term deal. Had they played out the franchise tag they would have paid him $15M for the year and if he does well they would end up signing him to a big contract next year that would have meant spending $35M on Fuller for two years. If he didnt’t do well they would have walked. Its basically a $5M risk to save $6M over two.  Since the Packers negotiated the contract the actual structure is probably better than what the Bears would have done on their own. The second part of the equation though is whether or not Fuller is worth this much. It’s hard to say no when another team is making the deal but Fullers career has never really warranted this kind of contract and I doubt the Bears initially thought he was worth it based on everything they did the last season.  Grade: C-

Amukamara has gone year to year for the last two years and this is a pretty fair contract. Unlike the Robinson deal the years shouldn’t be an issue since he’ll already be 29 in 2018 so its doubtful he would play at this level at the age of 32 anyway. This is pretty much the market for a good 2nd corner so nothing stands out negative here. It would have been nice to see a few per game bonuses in there since he never plays 16 games but the Bears didn’t really put themselves in a position to insist on that anyway based on last years contract. Grade: B

I’m rarely a fan of a team paying a backup to be a starter and this is no exception. Burton certainly has talent and maybe he will turn into a bonafide top tight end but I think this is risky. His contract ranks 2nd for guarantees (highest on a per year basis), 2nd in guarantees at signing, 8th in first year cash, and 7th in three year cash. If you are going to be this aggressive on a player who has about 650 yards in his career you really should be getting a five year deal out of him rather than potentially having to extend an older player after four years. This also wasn’t a real position of need for the team either. I have a feeling this may end up like some of these recent Bears contracts that have not worked out. Grade: C

The Bears essentially did the Mohammad Sanu contract for Gabriel which wasn’t a great contract but worked out ok. Gabriel is more of a niche talent than Sanu but I can see the similarity in uneven production and playing along top talent that demands the ball.  With the way wide receiver contracts went crazy I don’t even think the average per year is that crazy. However like with Sanu how do you guarantee this kind of coin on signing to someone who didn’t even top 400 yards last season? There is no doubt that Chicago needed receivers but there were better values if they waited. Grade: C-

Ill never understand the infatuation teams have with Daniel who has thrown 78 passes in his 8 year career. This contract makes him the second highest paid backup in the NFL to Nick Foles and it’s the same guarantee so he essentially received the same contract. You can’t get too wrapped up on backup money on the position but I’m not sure I’ll ever figure this out unless Daniel pulls a Foles and comes in and has a great playoff run. Grade: C

The last two years have been a disaster for Lynch, but there is some talent there is a team can bring it out of him. The Bears take a minimal risk with just $1.25 million guaranteed and have $500,000 tied to being active. If he makes the team and starts he will be a pretty cost effective pass rusher.  Grade: B

Parkey receives the third highest guarantee at the position less than a year after being cut from the Browns.  That seems kind of crazy.  It’s a kicker contract and like the backup QB deal you cant go too crazy about it, but this just seemed like a reaction to last year which saw them reach for the best available. Grade: C

Acho certainly isn’t going to dominate any games but he’s a solid enough contributor. Last year he played in over 60% of the defensive snaps and 50% of the special teams snaps so he’ll justify a moderate investment.  Grade: B

The last few years the Bears have been loaded with free agents and this year won’t change that as they continue to spend significantly to improve the team. Last year they had a terrible free agent run, easily the worst in the NFL, and it didn’t look good from the day they signed their first free agent contract. Though there is some of that same pricing aggression here at least the moves themselves carry more upside. Guys like Mike Glennon, Dion Sims, Markus Wheaton, Marcus Cooper and so on all had limited upside and it would have been a miracle for those types of players to all work out. Robinson has legit number 1 receiver talent and is young. Burton has the athletic ability to be a 700+ yard receiver. Both corners who they re-signed are starting quality, at worst, players. I think it’s only Gabriel who falls into the same category as some of their worse signings of the last few years.

Clearly the Bears are trying to load their offense with talent to help their young quarterback. It’s a clear vision for the team. They added two starting receivers and tight end to their skill group and kept their corners in hopes on not having games turn into a shootout right off the bat where the Bears are playing big catchup 10 minutes into the game.

I was a little surprised that the Bears did not make improving the offensive line a priority so that will have to be something they do in the draft now that Josh Sitton is gone. That’s really the one area that probably would have helped more this offseason.

The Bears are making two year commitments to their players which is a little bit of a departure from their prior contracts which were for lesser players.  That will firmly put their GM under the microscope if the team fails to improve.  The Bears will have ample cap space in 2019 to keep adding but they won’t have nearly the same firepower they did this season, so if these players don’t pan out there may be a big change in direction next season.