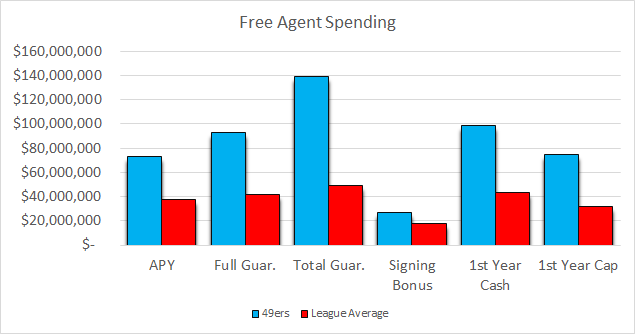 The 49ers made this trade late in the season last year and probably should have just worked on an extension prior to the trade if this was going to be the end result after just a handful of starts. Give the 49ers credit for being able to come up with a contract structure that made Garoppolo the “highest paid” despite not hitting the highest mark in any real meaningful metric while also not killing their cap if they are forced to release him in two years, but this is a fortune to pay for someone with 7 starts in his career. It is not as if Garoppolo was the first overall pick sitting behind a hall of famer, he was a player who four years had 61 other players, including 4 quarterbacks, drafted before him. As with most QBs teams are desperate so you have to look at these contract differently, but San Francisco should have had opportunities to do a much better contract. They need him to be great to make this a great signing. Grade: B-

Richburg was, in my opinion, the best available center but I do think it is very fair to question the price paid for him. In general centers have not fared well in free agency outside of Alex Mack who was a top line player, though there were market changes last year when the Jaguars extended Brandon Linder to a head scratching $10.34 million per year extension which set in motion a few other big extensions. With the cap room the 49ers had, they had the luxury of being able to come in with a big number without the worry other teams might have. The 49ers made a massive 1st year $17M investment which is pretty much right at the top of the position and surprisingly used a pretty big signing bonus despite all the cap space they had. Really the big strength of the contract for the 49ers is that their full guarantee at signing comes in at under 35% of the total contract value which ranks around 12th among veteran centers. Coming off a four game season it would have been beneficial to see more tied to per game bonuses. Grade: B-

There is no doubt in my mind that if Sherman is healthy enough to play in 13 or more games a year for the next three seasons that this will be the best contract on the 49ers during those three years. The 49ers risked next to nothing to sign Sherman as his $3M guarantee is less than the $4M they paid a 30 year old Earl Mitchell off a 9 game season in free agency last year. The 49ers created an incentive laden deal that still leaves Sherman underpaid even if he is a great player again and probably will draw some comparisons to the ill fated Ricky Williams rookie contract negotiated by Master P in the late 1990’s. With millions in per game bonuses, no true future guarantees, and reasonable contract figures this is nothing but pure upside for the 49ers. Grade: A+

This contract has to be the direct result of a terrible contract that the 49ers signed last year with Kyle Juszczyk that saw the team pay over $5M for a fullback that played in under 40% of the teams offensive plays.  You can’t expect a running back signing with the same team in the early stages of free agency to not demand a far bigger contract. McKinnon’s four year Viking career saw him start a total of 14 games, rush for under 2000 yards at about 4 yards per carry. He added 142 receptions for just under 1,000 yards. That should be good for around $4 million, not a contract that makes him the 4th highest paid running back in the league. Maybe the 49ers were negotiating against slotted rookie contracts or something when they came up with this one. I believe they also may have flubbed the contract structure here causing a small signing bonus to turn into a large one due to an obscure CBA rule, though I am not 100% sure about that. Either way this is one of the worst deals of the offseason and they must have a lot of faith in him to have gone to this number. Grade: F.

This is a pretty big price to pay for one year of Cooper, who is now on his fifth team since 2015. I guess the strategy in moving on from Brandon Fusco is similar to their trade for Laken Tomlinson last year in that they are stockpiling high draft picks at guard and expect two of three to make the team, so you want contractual flexibility to release this year. Still Cooper has basically been a $1.5M or less player the last few years and I cant imagine there was much interest anywhere else at $5M. The $2M guarantee is reasonable but that is a big upside number for him to not be named a starter. Generally you should not go over $3.5M if there is a chance to be a backup and bridge the gap with incentives. Cooper has the highest current true 1 year contract (Mike Iupati’s recent pay cut puts him just slightly over Cooper) in the NFL among guards and its not even close, with Chance Warmack and Matt Slauson at $2.5 million. Grade: D

This is one of those contracts that people probably look at negatively because of the nearly $4M APY for basically a journeyman swing tackle, but when you look at the overall structure it’s a different story. Gilliam will earn $2.7 million this season, just $500,000 more than he received last year from the 49ers. His salary next year jumps to $5.05 million and it costs nothing to release him. So basically he is a market or very slightly above market player this year and either proves he can be a starting right tackle or is cut. Nothing wrong with that kind of contract. Grade: C

Marsh fills a role for the 49ers as a situational end that also plays special teams. As a contract this is a bit rich for his production so far. While the contract has more in year 2 than year 1, it’s not the big discrepancy like the Gilliam deal. Alex Okafor, who has had a far more productive career and a similar draft grade, re-signed with the Saints for slightly less money during the heart of free agency. The 49ers wanted to get a bunch of their contracts done early but they would have probably saved around $1M a year if they waited.  Grade: C-

This is a shot in the dark contract on a second round pick who has spent a good deal of the last two seasons battling injuries and ineffectiveness. There was a time when he looked like he would be a good pass rusher but he likely needs a strong coaching system to see if they can get that out of him now. In essence he is a cheaper replacement for Aaron Lynch, who signed for $4 million with the Bears. Lynch had less guaranteed and I think you could make the argument that the 49ers over-guaranteed this contract  especially since players like this may not even make the team but maybe they see enough openings that they are considering his spot a given no matter what. Grade: C

This is similar to the Marsh signing where it seemed to be more about just whatever number out there for the purpose of getting a deal done.  Coyle played a role last year but other players have had similar roles and far more upside that signed for less money at the position. He’ll make close to $3.5 million this year and I’m not sure he should be earning much more than $2 million based on his history. Hes also hurt and will take some time to fully recover.  Small deals like this don’t really hurt you but that doesn’t make them good ones either. Grade: D

No team committed more new contract money than the 49ers this offseason, but most of that is because of the massive contract for Garoppolo.  Overall I just look at the moves made and come out feeling underwhelmed given all the resources they had to work with. I honestly expected them to be competing for some of the big name talent at corner, guard, and receiver while maybe trying to land a decent pass rusher and they were never in on those players. They really overspent on a number of players and while none will hurt them whatsoever it just seems they could have done more outside of having Sherman fall to them. I will say that this has to be a pretty unique situation where a team may have signed both the best (Sherman) and worst (McKinnon) contract in free agency in the same season.

Some of what the 49ers do still has that seat of the pants feel to it. Maybe that’s the inexperience of the GM, but the 49ers spent more money last year on players that didn’t stick on the team for the full season and this year has that same potential. Already they signed center Daniel Kilgore to an extension in February and turned around and traded him in March when they decided to make a play for Richburg. That didn’t cost them much but that was more luck than anything that they found a partner willing to trade for him.

They added a better center, a better corner, and some depth but this feels like the same team. They ranked 12th in the NFL in terms of outside dollars added and that number is kind of bloated when you look at some of the signings. That’s not to say that this is a bad thing as building through the draft is better but with everything they had at their disposal they could have probably covered themselves at one or two more positions better. If that 5 game streak at the end proves to be a fluke there is going to be criticism for not doing enough in free agency.